Cat behavior during bereavement in my home was interesting.

Anyone who has pets, knows all of the value that they provide.

People who own pets know how beneficial the relationship is for each other.

The pet owner provides food and shelter, and also keep their companion safe and healthy.

In return, pets provide a loving welcome when you come home. They stay close at hand when you need comforting. And they give unconditional love to you, just for being you.

Our pets know quite a bit about us. I feel they connect with us on many levels. 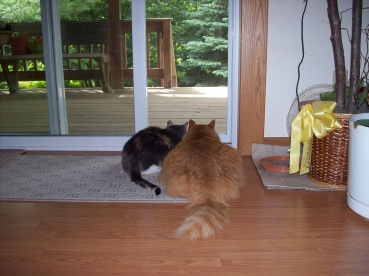 Fluffy and Dusty looking out the patio door.
Cat behavior during bereavement

I would like to introduce you to my two cats, Fluffy and Dusty.

Fluffy is a large orange male cat. He weighs about eighteen pounds. He is a cat with a very sweet disposition. I found him as a very big stray kitten about seven years ago.

Dusty is a small gray calico feamale cat. She weighs about seven pounds. My daughter brought her home from a friend's farm, two years before we got Fluffy.

The two cats get along pretty good. They are very different in personality.

Dusty is a cat who I think of as a 'mother' type. She keeps a watchful eye on things. When Fluffy entered our household, Dusty was a strict mother to him, even though as a kitten, he was as big as she was.

Fluffy remains a 'big kitten'. He plays with soft balls, and hides around corners to suprise Dusty. He is very friendly.

This story about Fluffy and Dusty also includes my son Alex. Alex passed away at age seventeen.

Both of the cats absolutely loved Alex. If Alex was sitting down, I could place either cat on his lap and the cat would stay there. If you know anything about cats, they do not stay where you place them, if they do not want to stay.

Fluffy always liked to sleep with Alex in his room. Alex didn't care for it so much, as he slept with his door closed. Fluffy would want to leave during the night, and would wake Alex up by pawing at the door to get out. He tried to keep Fluffy out of his room, but it was hard.

After Alex died, I wan't paying all that much attention to the cats. I fed them and cared for them, but was understandably distracted.

My husband Gary, called to my attention, how peculiar the cats were acting. Than I noticed it also. It was almost like they were searching for Alex. They kept walking all through the house. They were very restless. This went on for a number of weeks. The cats missed Alex and were looking for him.

Dusty had never spent much time in Alex's bedroom, when he was here. During the months after he passed, I always found her on his bed. I found this unusual, but understand that animals know things that we do not. Dusty still sleeps on the bed today.

During the colder winter months, Dusty likes to sit on Gary's lap. When the weather is warmer, she usually stays off.

Read more about cat behavior, and much more of what cats know, including their unusual sixth sense.

I do think that not only cats, but other types of companion animals know when a loving member of their people family die. They grieve in their own way, and offer us their own kind of comfort.

If you have noticed any strange or unusual cat behavior during bereavement, maybe you would like to add you own thoughts. Let me know.

Back To Bereavement Articles

Go To The Homepage From Cat Behavior During Bereavement