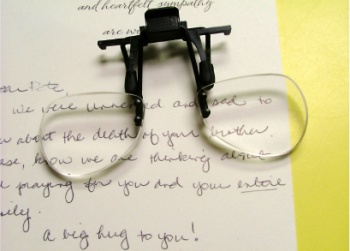 The bereavement announcement, or funeral notice, is the traditional way of letting those who share in your loss, be aware of the funeral arrangements.

As difficult as the announcement is to make, it is important and necessary. It gives information as to the funeral details, and also serves as a tribute to the loved one.

Losing someone you love, is a most difficult time to go through. There are arrangements to make and financial matters to take care of.

The most common place for an announcement to appear is the area newspaper. Some smaller communities have weekly papers, in which you may also want to place a notice.

Many newspaper editors will help in putting together a funeral notice. They are familiar with the format, and know the questiona to ask to compile a respectful and fitting tribute.

When my son died, our funeral director was invaluable in assisting us with creating a bereavement announcement. He asked us questions about our son, the relatives names to be included, and any of the personal details that we wanted listed. He even submitted it to the area newspaper. I do not think, that at this time, I or my husband would have been thinking clearly enough to have written an announcement.

The most basic things to include, are also the most important.

The notice usually begins with the person's full name, which is the first, middle and last name. A women's maiden name is listed. If it is appopriate, the age may be given.

You do not need to go into detail about how they died, unless you want to.

Close relatives, such as a spouse or partner are then listed. The names of the children of the deceased and their spouses may be included. If the deceased was a child or an unmarried adult, the parents may be noted as the closet relation.

Within the bereavement announcement, a bit of personal history may be included. It does not need to be in depth. It can simply be a line or two about the 'loving wife' or 'great father' that they were. It could also mention volunteer work, or the place of business they were employed at.

These could be left out if you do not want to reveal anything you consider too personal or private.

List the date and time of when and where the funeral will take place. Include if there will be a meal or social time to follow. Will there be visitation time before the funeral?

For out of town guests, a hotel recommendation close to the funeral site may be noted.

Will the service be private for the family only? You could state "Private funeral services will be held."

Often, something can be included in the announcement that the deceased has enjoyed. This can be a poem, quote, verse or scripture. Try to find one that is uplifting and captures the loved ones energy and personality.

The family may also include a passage or poem that honors how they feel about their loved one.

At times, the family would prefer that instead of giving flowers, a donation be made to the loved one's favorite charity. The request should be included in the announcement, and read: "In lieu of flowers, please send contributions to____________________."

Do not rush to get the notice out before you have made all the arrangements. Things may change, and it may be difficult to post another announcement. But do get the notice out in a timely mannor, as people will need to adjust their schedules, and make their own plans.

When my son died, the thought of speaking of it, to anyone, to let them know what happened, was very, very difficult. I made one phone call to my sister, who lives quite a distance away. She phoned the other family members. I know that I could not have made more than that one phone call, at that time.

In todays world, most funeral homes place the bereavement announcement or obiturary on the internet. My distant family members and friends could find it there.

You may want to write an obituary at this time. An obituary is similar to a bereavement announcement. The funeral details are usually left out.

Within the obituary, you can go into more detail about the deceased's life, the accomplishments, and career. A picture may or may not be included.

Back To Bereavement Articles

Go To The Homepage From Bereavement Announcement

But from our thoughts

you are never gone.